The 200 MW Salamander floating wind project, developed by Simply Blue Energy in partnership with Subsea 7, has signed a memorandum of understanding with ERM for the potential use of the ERM Dolphyn hydrogen technology. The project is also working closely with Scotland Gas Networks (SGN) to potentially integrate with and connect into future 100 % hydrogen infrastructure or as a blend with existing gas infrastructure, which SGN are aiming to develop through their decarbonisation roadmap.

The award-winning ERM Dolphyn is a first of a kind technology combining electrolysis, desalination and hydrogen production on a floating wind platform - with the hydrogen transported to shore via pipeline. It is an economic and scalable solution, which produces green hydrogen with no carbon emissions at the point of use.

SGN is the owner and operator of the gas distribution networks in Scotland, who are currently carrying out the North East Network and Industrial Cluster Project, which in its first phase, aims to develop and deploy a hydrogen economy in Aberdeen and the surrounding area.

The Salamander project, with the incorporation of ERM Dolphyn technology, has the potential to make a material impact on the Government’s 10-point plan, including the ambition to deliver 1 GW of floating wind power by 2030 and 5 GW of green hydrogen by 2030. The proximity to St Fergus Gas Terminal, the significant interest in the energy transition in the Aberdeenshire and Aberdeen City regions demonstrated by the recently announced Energy Transition Zone, as well as key flagship projects such as Aberdeen Vision make Salamander the ideal location for green hydrogen production. The combination of innovative floating wind and green hydrogen technologies, and the pipelines and assets surrounding the St Fergus Gas Terminal present an ideal opportunity to begin to decarbonise North Sea energy production.

Adrian de Andres, Salamander Project Director, said “When we started the Salamander project, we always envisioned a stepping-stone project and a catalyser for future, bigger commercial opportunities. Considering the rapidly approaching 2030 deadline for the floating wind and green hydrogen targets, we now think the Salamander project could act not only as a stepping-stone for floating wind but also potentially for green hydrogen production, paving the way for multi-GW green hydrogen developments in the 2030s. The Salamander project is targeting a lease under the upcoming Innovation & Decarbonisation leasing process and looks forward to putting forward our ambitious green hydrogen plans to Crown Estate Scotland and Marine Scotland. We believe our vision very much fits with the objectives set by the Scottish Government in the Hydrogen Policy Statement as well as the decarbonisation of the North Sea.”

Steve Matthews, Major Projects Director at ERM said: “We are delighted to enter into this memorandum of understanding with Simply Blue Energy and Subsea 7 for the Salamander project. Our ambition for ERM Dolphyn is to progress towards multi-GW, green hydrogen-producing floating wind farms over the next decade - in the UK, Europe and further afield. Salamander potentially provides an ideal first step for us and, with the valuable support of Government and industry, it will help position Scotland and the UK at the forefront of green hydrogen generation.”

Sir Ian Wood, Chairman of ETZ Ltd, said: “The potential for the world’s first combined floating wind and green hydrogen project to be located off the North East coast of Scotland is a hugely positive development and one that reinforces our region's credentials in becoming a globally recognised energy cluster. This is a pioneering project that will help enable the huge potential in green hydrogen production from floating offshore wind turbines and I commend ERM Dolphyn, working with Simple Blue Energy and Subsea 7, for moving this forward at pace.”

“The Energy Transition Zone is being developed to ensure this region has the right facilities to support projects such as Salamander so we can realise the full potential of green hydrogen and other exciting energy transition activities. By developing the energy transition opportunities in the region, we can attract more transformative projects while creating new jobs in our energy transition supply chain, attracting international investment to realise our net zero ambitions and deliver benefits to communities across the region.”

Emma Harrick, Energy Transition and Supply Chain Manager at Scottish Renewables, said “Scotland has an ambition to increase the amount of offshore wind in its waters tenfold by 2030, with the ongoing ScotWind Leasing process likely to provide the lion’s share of that capacity. However, supply chain organisations need the time to prepare and to improve their competitiveness for large-scale commercial deployments, and smaller offshore projects like Salamander can provide a useful stepping-stone for suppliers hoping to upskill, learn and invest with the aim of benefiting from the multi-billion-pound opportunity of global decarbonisation.” 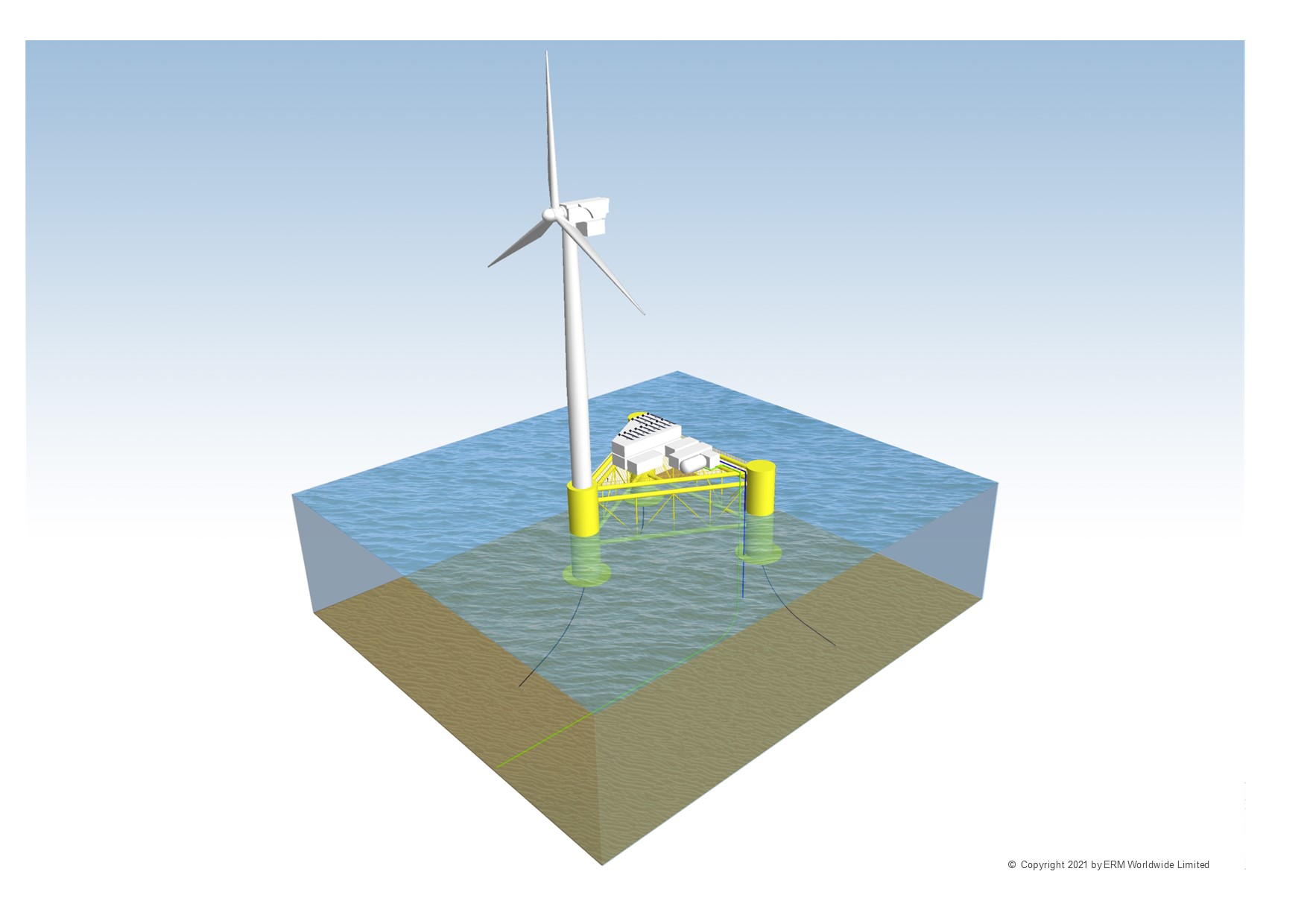 Who are Simply Blue

Simply Blue Group are the leading early-stage developer of transformative and sustainable marine projects in the UK and Ireland. Established as a blue economy developer in 2011, Simply Blue has grown rapidly to become the leading developer of pioneering sustainable marine projects in the UK and Ireland. Initially focusing on floating offshore wind and wave technology as Simply Blue Energy, Simply Blue expanded into the growing sustainable aquaculture sector with the establishment of Simply Blue Aquaculture in 2018. Blue Gem Wind, a joint venture partnership with energy giant TotalEnergies, is currently developing the Erebus 96MW floating offshore wind project, along with another larger project off the Pembrokeshire coast. Situated off the south coast of Ireland, Emerald, another floating offshore wind project, is also in development, where Simply Blue has formed a joint venture partnership with Shell.

Simply Blue’s mission is to raise awareness of the oceans’ potential, pioneer marine project development and work with partners to build a sustainable blue economy and communities. With a team of over 40 and growing, Simply Blue is actively progressing numerous other projects in the UK, Ireland and in other jurisdictions around the world. To find out more visit: www.simplybluegroup.com

Who are ERM and ERM Dolphyn?

ERM is the largest global pure-play sustainability consultancy. We partner with the world’s leading organizations, creating innovative solutions to sustainability challenges and unlocking commercial opportunities that meet the needs of today while preserving opportunity for future generations.

To meet carbon targets in the UK and more widely around the world, it is now increasingly accepted that hydrogen needs to be a significant component in any viable long-term solution for heat, electricity generation and transport. ERM Dolphyn has been developed to produce green hydrogen at scale and at an economic cost, as a way of addressing this need. It is an award winning, first of a kind innovation, which employs a modular design, integrating electrolysis and a wind turbine on a moored floating sub-surface structure to produce hydrogen from seawater using wind power as the energy source. It can be deployed at multi-GW scale in deep water, where more than 60% of the world’s available wind resource exists. Effective deployments will make a material impact on net zero commitments.

How can I get more information?

For more information on the Salamander Project, please go to our project website https://salamanderfloatingwind.com

For more information on ERM Dolphyn, please go to our website: https://ermdolphyn.erm.com/

For any additional queries on the Salamander Project, please contact us at salamanderwind@simplyblueenergy.com or +44 (0) 790 741 8834

For any additional queries on ERM Dolphyn, please contact the ERM Dolphyn team at:
connect_ermdolphyn@erm.com